This is a tragic case involving a seriously injured 16 year old pedestrian who was riding a longboard (a longer skateboard designed for cruising). 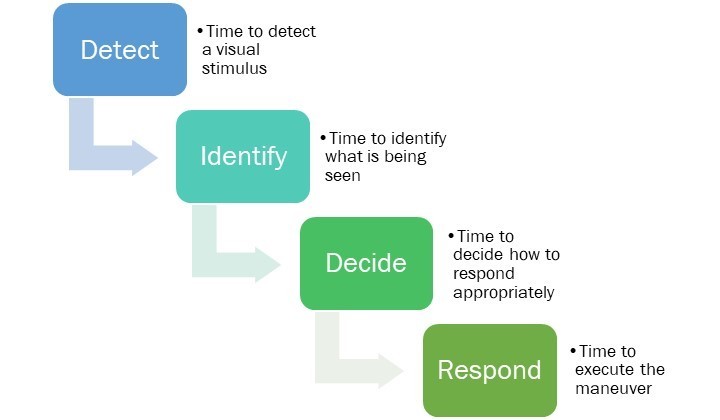 A scaled timeline of the collision is shown below (click to enlarge).

What was the impact of the non-working streetlight on this collision? Could the collision have been avoided if the streetlight had been working?

This non-functional street light contributed to the lack of roadway lighting in the area. Had the street light been function properly, the driver may have been provided with more opportunity to avoid the collision.

While not shining directly on the area of impact, this malfunctioning streetlight likely contributed to the below-standard lighting level in the area surrounding the area of impact. Further, by reducing the amount of light cast in the area beyond the pedestrian (from the perspective of the driver), the malfunction street light would not have illuminated the background beyond the pedestrian to the same degree, creating less contrast and, therefore, less visibility. Had the street light been functioning and the lighting level met the ANSI standard, the area surrounding the pedestrian may have created more contrast, allowing the driver to detect the pedestrian from even further away, adding to the likelihood of avoidance.

The absence of identification was likely the result of a lack of illumination of the streetscape and the glare imposed by oncoming traffic. The presence of functioning street lights in the area can be expected to greatly improve the detection distances and significantly reduce the likelihood of collision.

Fixed roadway lighting has been shown to counter the effects of headlight glare. First fixed lighting increases the visibility of pedestrians on the road. Second this lighting raises the adaptation level of the driver, thus mitigating the effects of headlight glare. Since the driver was travelling relatively slowly, but for the non-functioning luminaire, it is probable that the collision would have been avoided.

What is contrast and how does it factor into the ability of drivers to see pedestrians at night? 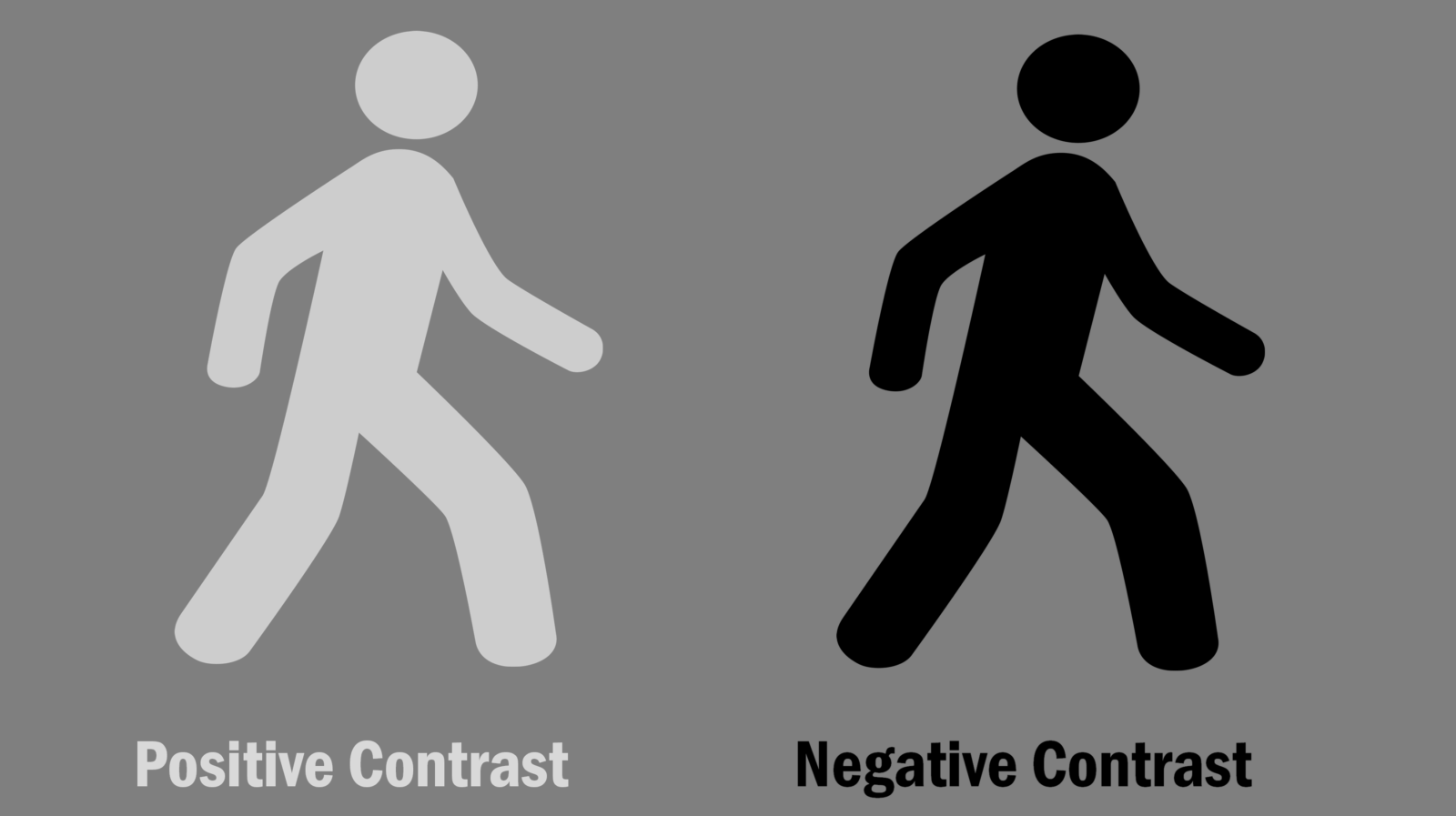 What impact do streetlights have on illuminating the background behind a pedestrian to create negative contrast?

The purpose of the field test was to compare viewing conditions with and without a single working streetlight. These photographs were taken at the pedestrian and vehicle positions relative to the streetlights at 3 and 5 seconds before impact.

It is important to note that readers of this post have the luxury of being able to take their time reviewing the photographs from the field visit while a driver would only have seconds to see the scene before impact. In addition, readers of this post are aware of the circumstances of the collision and have an expectation of the presence of someone on the roadway. This expectation that someone is on the roadway greatly reduces the time it takes to find and identify the pedestrian. 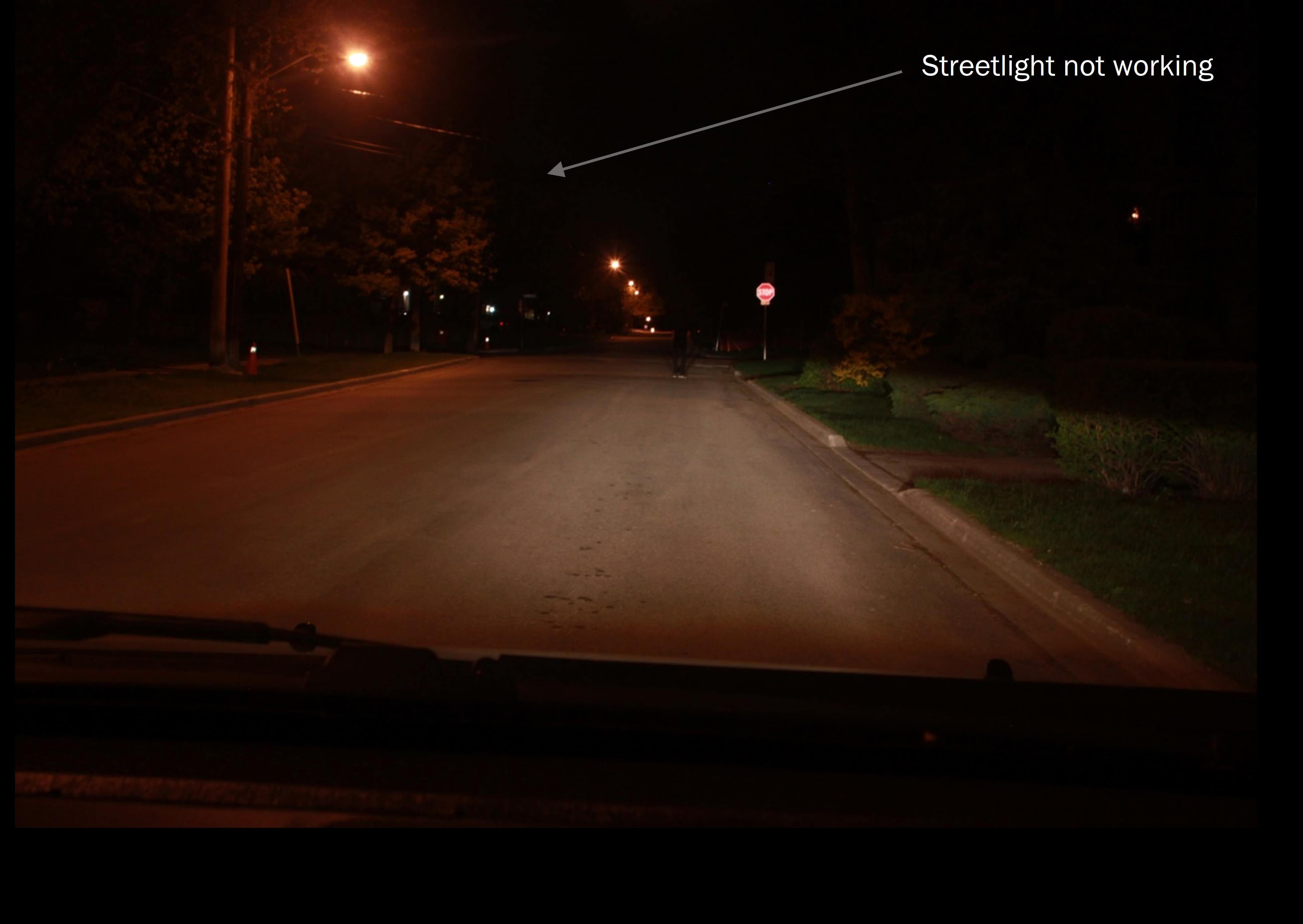 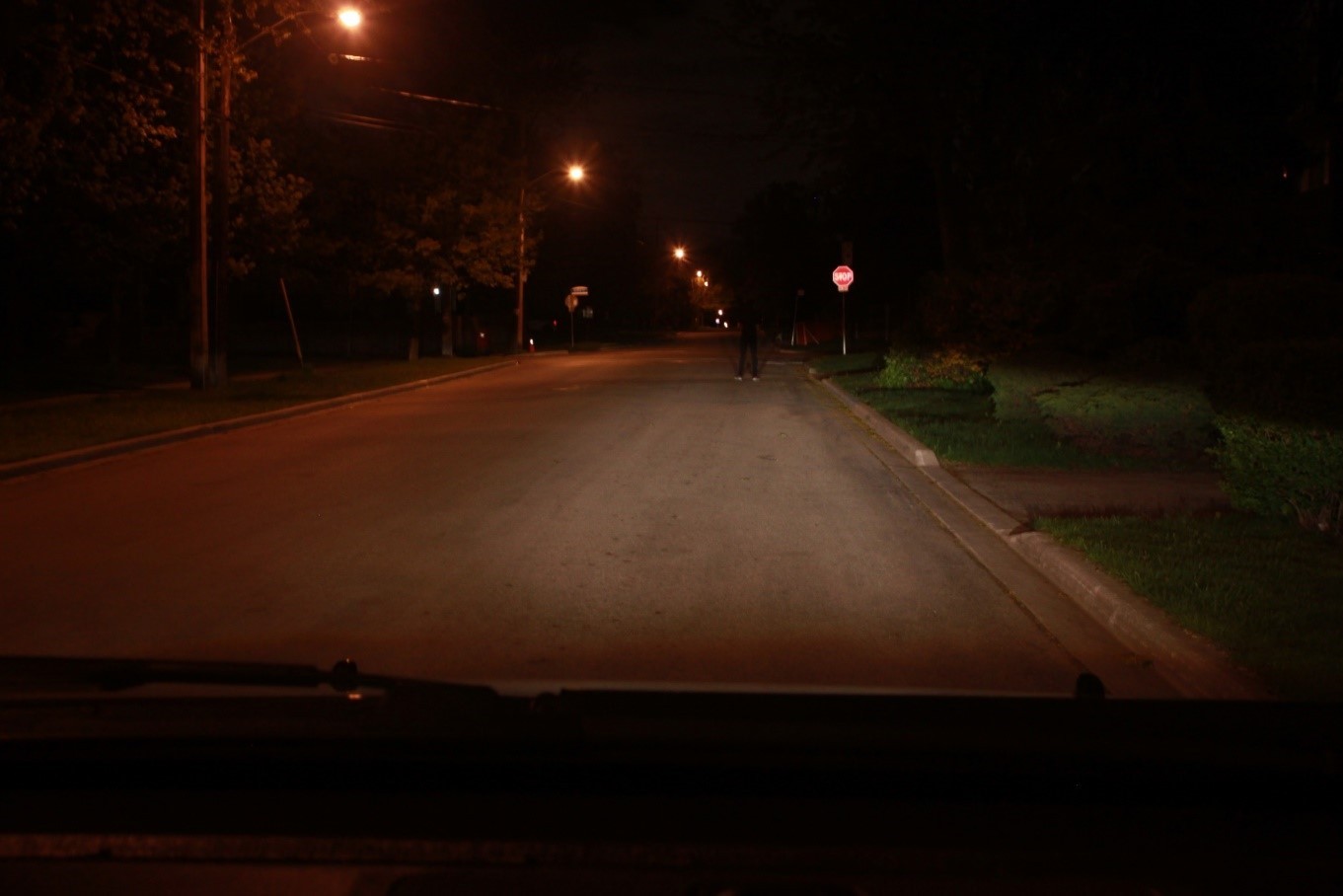 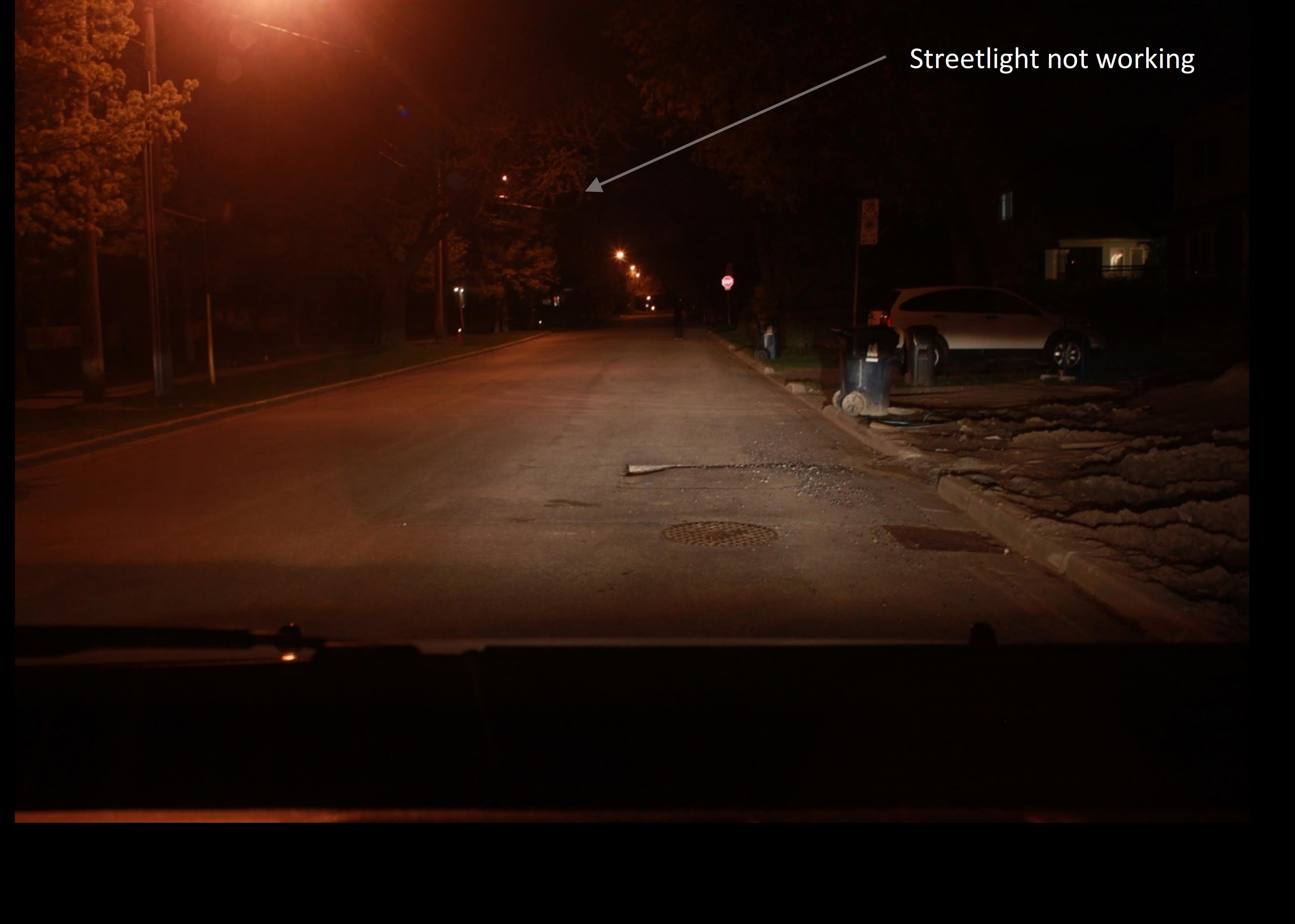 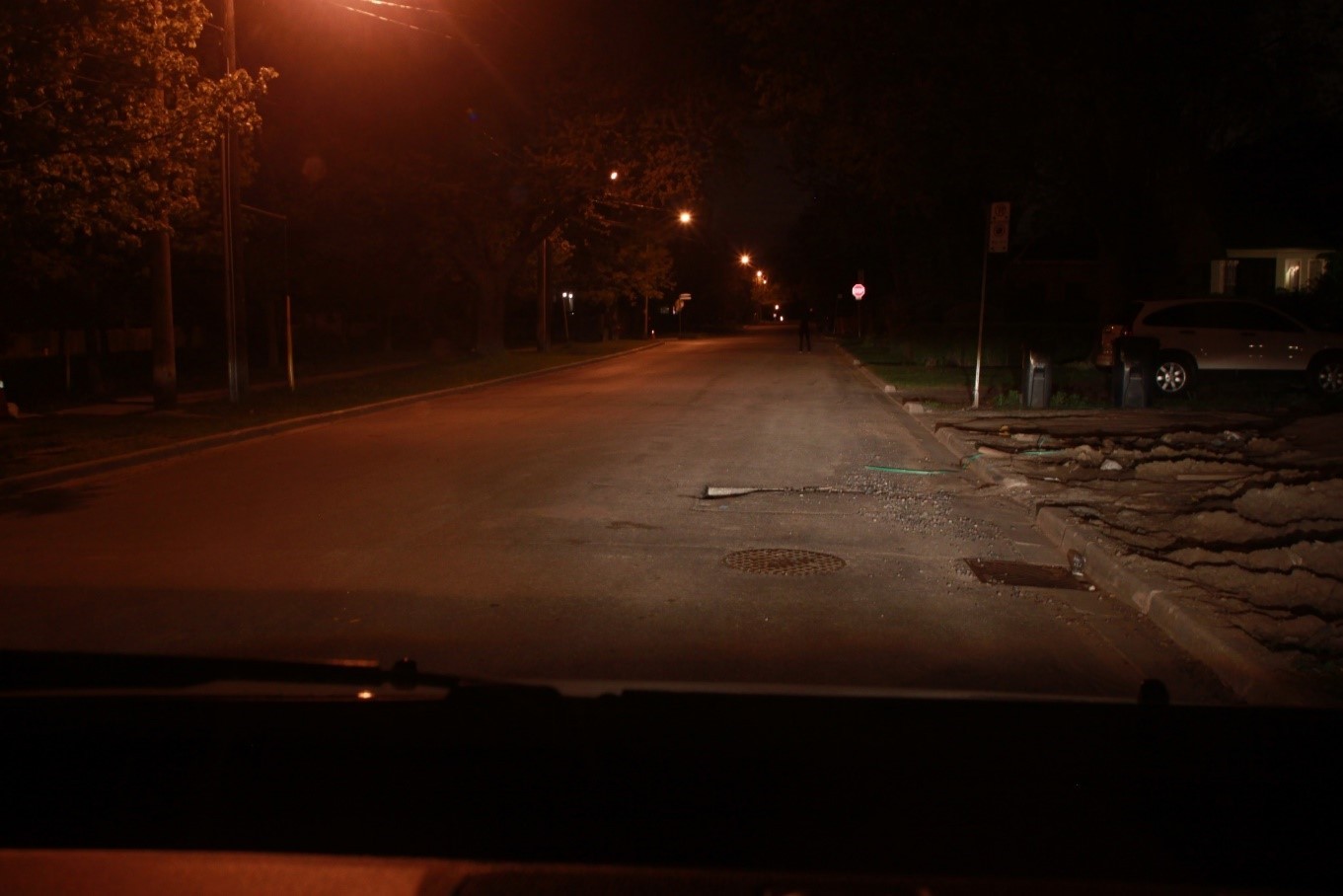 The human factors analysis of the collision takes into account both perception-response time and the importance of contrast.

“The point to this is that, even if the streetlight provides uniform illumination of the roadway and crosswalks, the lighted pavement will not be the background of importance against which the pedestrian will be viewed.”