The Plaintiff, Ms. Jane Huang, while traveling east on Smith Crescent towards Glover Road, was seriously injured in a collision with a Canadian National Railway (“CNR”) train on railway track owned by The Canadian Pacific Railway (“CPR”) [Defendants] on May 8, 2014. The collision occurred while Ms. Huang was crossing railway tracks just west of the intersection of Smith Crescent and Glover Road in Langley, BC. Smith Crescent is a low volume, two-lane road with no centreline with a 50 km/h speed limit. Glover road is two-lane highway with shoulders, full pavement markings, and a 70 km/h speed limit. The maximum speed allowed for trains in that section is 35 mph (56 km/h).

Traveling east, the following images are taken from Google Streetview capture dated August 2011, which match the description of the collision location given in the judge’s decision.

No trucks sign and a “No Exit to Trucks in Excess of 7 metres Via Railroad Crossing” sign. 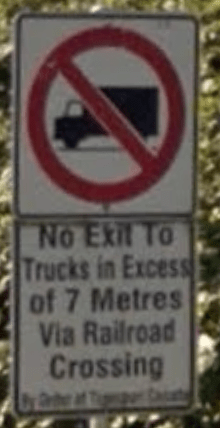 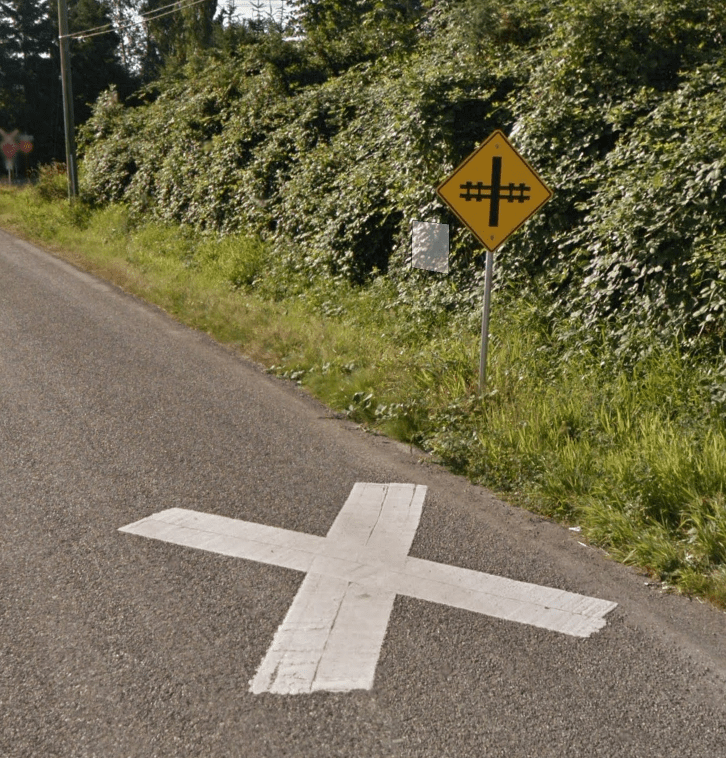 At the collision location, there are two sets of stop signs and stop line pavement markings. The first stop line is located about 5 metres from the western rail. Above the first stop sign is a crossbucks sign and below it is a “No Stopping On Tracks” sign. The second stop sign is located approximately 4.7 metres past the eastern rail. Ms. Huang’s vehicle, a 2008 Mercedes-Benz E300, four door sedan was approximately 4.8 metres long. The distance from the second stop line to the edgeline of Glover Road is 5.4 metres. 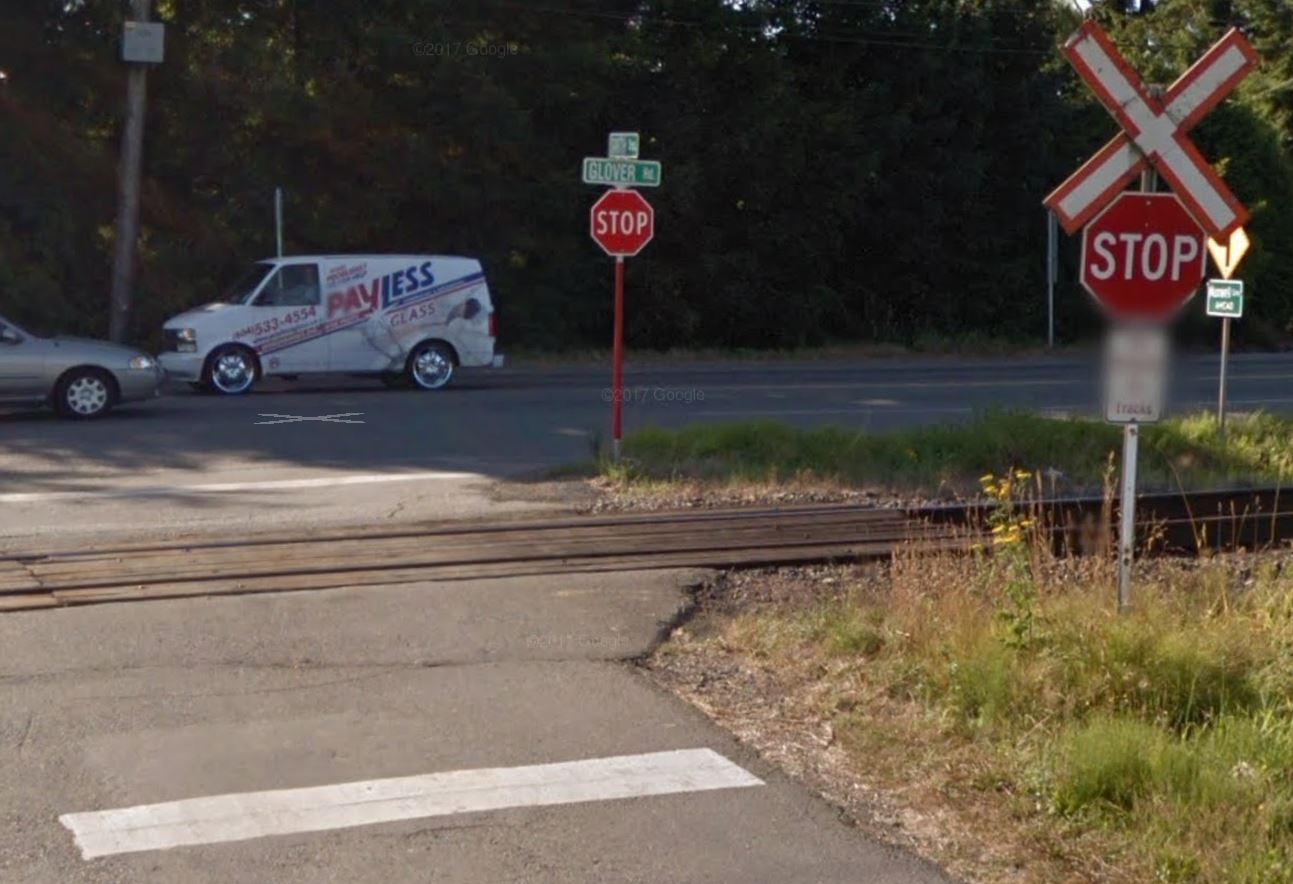 A large dirt berm, fence and overgrowing vegetation was present on the right side of Smith Crescent. 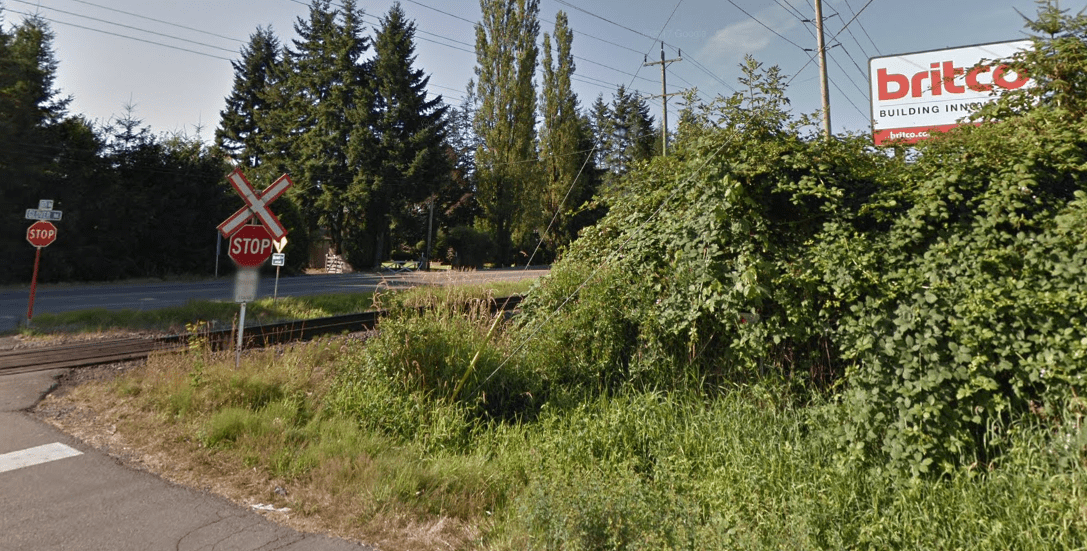 Ms. Huang had just started working at Britco 16 days earlier. Despite understanding the meaning of the signage at the crossing, Ms. Huang believed that railway tracks had been abandoned. Ms. Huang came to this belief for three reasons: 1) she was familiar with other crossing in Vancouver with similar configurations that had been abandoned, 2) the intersection layout was unbelievably unsafe and could therefore no possibly be a “real railway crossing”, and 3) the active crossings Ms. Huang was aware protected by gates, bells, and traffic lights. Ms. Huang testified that drivers at those other abandoned crossing would honk at people who would stop at the first stop sign. Ms. Huang had never seen nor heard a train during her time working at Britco. Since she could not see anything when approaching the first stop sign, as her view was blocked by a wall of bushes, Ms. Huang did not normally stop at the first stop sign. Ms. Huang had no memory of the collision.

The intersection safety and collision history is as follows:

The relevant sightlines guidelines for railway crossings without automated warning devices are:

On the day of the collision, vegetation was obstructing the sightline for drivers. CPR was responsible for ensuring adequate sightlines at railway crossings. CPR gave no evidence as to when the bushes at the collision intersection had last been cut back or trimmed. CPR provided no indication that any employee had ever reported a sightline problem at the collision location.

Dr. Matthew Yanko presented human factors evidence. Dr. Yanko opined that perception response time involves four stages: the presence of a detectable stimulus, detection by the brain, deciding on a response, and executing that response. Dr. Yanko also expressed the opinion the similarities between the collision location and other abandoned crossings could cause a driver in Ms. Huang’s circumstances to dismiss the ‘controlled’ processing involved in detecting a stop sign and to rely on a more automatic processing. Dr. Yanko testified that a driver’s expectation about the frequency of oncoming trains is one of a number of factors that determine detectability.

Mr. Kurt Ising addressed some of the human factor issues including the sightlines. Mr. Ising found that the sightline condition at 8 metres from the tracks at the collision location did not comply with the SPC-29 minimum sightline requirements. Mr. Ising assessed the available sight distance as measured following the G4-A requirements to be 75 feet. With respect to the speed that Ms. Haung would have been driving, Mr. Ising testified that reconstruction the collision was necessarily imprecise given the limits of the available evidence and some of the circumstances.

Mr. Douglas Kennedy provided expert testimony regarding the audibility of the train horn inside Ms. Huang’s vehicle prior to the collision. Mr. Kennedy stated that there are various factors that decay sound over distance including the ground, sound reflections, and obstacles (such as the berm). According to Mr. Kennedy, the audibility of a sound is a function of detection, recognition, and altering thresholds, which he admitted were not well defined. Mr. Kennedy explained that the signal-to-noise ratio has to be positive in order to be heard; where the signal is the horn and the noise is the background noise within the vehicle. Mr. Kennedy used to the research to opine that in order for someone to be alerted to a sound, the “danger signal” has to be 9 or 10 decibels higher than the recognition threshold. Mr. Kennedy measured the sound output from the horn on a train travelling through the collision location, using microphones placed at the height of a seated driver at various distances from the track, which fed into sound and vibration analyzers. Mr. Kennedy relied upon a Transport Canada research study to say that a horn behind an exhaust outlet is lower by 10 to 12 decibels when the train is moving. Mr. Kennedy also measured the background noise inside a similar but not identical vehicle. To estimate how the vehicle’s radio would have contributed to the background noise, Mr. Kennedy assumed that it would be four decibels, as stated in the literature. Based upon his calculations, Mr. Kennedy concluded that Ms. Huang would not likely have been alerted to the train horn in time to avoid the collision.

Dr. Erin J. Potma provided an analysis of the sightlines at the collision sight. While Dr. Potma agreed that the sightline condition at 8 metres from the tracks at the collision location did not comply with the SPC-29 minimum sightline requirements, she concluded that there was sufficient visibility for a reasonable driver to assess whether the path was clear to proceed safely across the track. Dr. Potma based her opinion upon a sightline of 150 metres when measured from a position where a driver had pulled ahead of the stop line to look for oncoming trains. Dr. Potma testified that it was not clear to her how the standard should be applied, or if it even did apply to the collision location, given the stop line was only 5 metres and not 8 metres away from the railway tracks.

Dr. Farheen Khan provided opinion evidence regarding the audibility of the train horn largely from a human factors perspective. Dr. Khan pointed out that the Transport Canada research study used by Mr. Kennedy was actually a literature review and that there was no evidence that the horn on the collision locomotive was behind an exhaust outlet. Dr. Khan measured the sound made by the train involved in the collision in the train yard and found that it was compliant with the regulations. She measured the background sounds at the collision location. Dr. Khan also measured the ambient sound from the environment and noise inside the vehicle with the engine, fan, and radio all turned on. Dr. Khan sat in the vehicle at distance away from the train and found that she was able to hear the horn against the background sound of the vehicle. Based upon her testing and calculations, Dr. Khan found the sound levels of the horn or signal exceeded the background noise levels at the collision location, except when the fan was on high, the radio volume was high, and the vehicle was positioned 45.7 m away from the train. At 6.4 m away, the signal-to-noise ratio was high enough that Dr. Khan concluded that even if Ms. Huang had no expectation of encountering a train, the horn would have been loud enough to be audible. Dr. Khan stated that even when a driver expects no trains, a train horn, much like a fire alarm or a siren on an emergency vehicle, is immediately or easily recognizable as a warning that a train is approaching.

The judge raised concerns about Dr. Potma’s opinion because she “imposed an overly precise analysis on imprecise evidence” with respect to her estimate of the speed of Ms. Huang’s vehicle. The judge also felt that Dr. Potma’s report should have included a list of factual assumptions that formed the basis of her opinions, as Mr. Ising had done. The judge stated “some of Dr. Potma’s opinions rest on her own findings based on her own view of circumstances that I am not able to accept and were not established by other evidence”. The judge also stated “Dr. Potma’s interpretation of the G4‑A as permitting a measurement distance that involved pulling forward of the First Stop Sign is clearly an outlier and inconsistent with the purpose of minimum sightlines which can only be public safety and accident prevention.”

The judge felt strongly that the standard of care required the sightline of 525 ft (160 m) [an interpolated distance for a 35 mph train] be available to a motorist before reaching the stop line.

The judge agreed with Dr. Khan’s criticism of Mr. Kennedy’s sound recording technology and methodology to doubt Mr. Kennedy’s conclusion that Ms. Huang would have unlikely been alerted to the train horn in time to avoid the collision. The judge found Mr. Kennedy’s interchangeable use of the terms “detectability”, “audibility”, “attention” or “attentiveness” undermined his conclusions. The judge was troubled that Mr. Kennedy made an assumption about the impact of the vehicle’s radio based upon the literature rather than measure the impact himself. The judge felt that it was more probable than not that Ms. Huang heard the train horn when it sounded for the last time before the collision. The judge criticized Dr. Khan’s reports for not including the details of her sound level testing results and calculations, and her tendency “to moralize about human factors”. Overall the judge felt the two experts highlighted the complexity and uncertainty involved in trying to replicate the sound level inside Ms. Huang’s vehicle right before the collision.

The judge relied upon Dr. Khan conclusions that the train horn would have been audible within Ms. Haung’s vehicle. The judge inferred that Ms. Huang’s attention was drawn toward the sound of the horn but she was unable to see the train at that point due to the obstructed sightline.

The judge ruled that the allegation of a one second length of the short signal (instead of two seconds) which followed two long signals was not an act of negligent regarding the use of the train horn. The judge stated that while a long, long, short, long pattern is mandatory, the length of time required for each sounding of the horn or the gaps between is not specified by regulations. In addition, regarding the duration of the short signal, the judge stated “the standard of care requires reasonableness not perfection”.

The judge apportioned liability 60% to the CPR (Defendant) and 40% to Ms. Huang (Plaintiff). The judge felt that while Ms. Huang was negligent in believing the railway tracks had been abandoned, she had not been driving recklessly or deliberately taking risks. In contrast, the judge ruled that CPR was indifferent in maintaining adequate sightlines despite being fully aware of the grave risk of collisions.